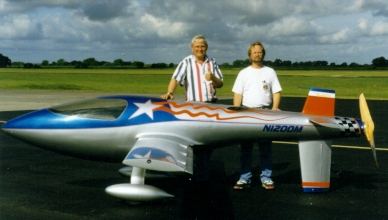 Lars and Tom the day before the test flight.

The take off of the VmaxProbe was a wonderful sight to behold!  She climbed like she knew she belonged in the sky.  Lars continued to climb while he had good temps and power.  The 2SI motor was a strong a thunderous sound.  Lars radioed that the temperature was starting to climb, so he throttled back to let it stabilize and get a feel for the controls.  Everything was going as planned.  He had a chase plane go up after him.  They radioed that "that thing is FAST".

After about 5 minutes of successful flying, Lars decided to bring her in.  It was a picture perfect approach.  About 1000 feet down the runway, he was holding her off at about 5 feet.  Then something went wrong.  The aircraft dropped abruptly, the left wingtip struck the ground and the aircraft rolled and struck the runway inverted.

Geneva and Tom were the first ones at the scene.  Lars sustained a traumatic head injury and passed away at the hospital 6 hours later.  He appreciated all the support you have given him and it was your support that helped make his dream possible.

This is the article that appeared in the Houston Chronicle. 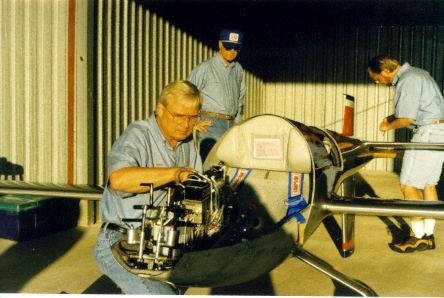 Lars and Tom making final checks for the test flight

No, it is not a model, it is the real thing as it rolled out on Feb 2.